Families, neighborhoods and even the remains of loved ones are bulldozed over in order to build new highways and other works without the input of the people.

CAIRO — One Saturday last month, I stood surveying the rubble of my family's burial plot in the historic area of Cairo known as the City of the Dead. The wall separating our plot from the street had been demolished by a bulldozer that morning. The government was clearing a path for an overpass, 17.5-km-long, that will cut through this ancient necropolis, linking the October 6 Bridge to the Mushir Tantawy highway — and our family's burial ground, like many others, was inconveniently in the way.

Underneath the broken brick and stone is the tomb where the remains of my paternal grandmother, my grandfather, and my great grandfather had lain for decades. In the small white-walled room beneath the ground I could easily make out the hollows in the sand where their bodies had been — three darkened patches, thin and long. I lingered there for a minute, not knowing what to feel, only that the emotion was boiling somewhere deep in my stomach.

A few days earlier, my father had called me in the middle of the afternoon. When I answered, his first words were, "I'm at the cemetery." He spoke in quick, short sentences. He was moving the bodies to another underground room in the same plot, but in an area that would be spared demolition. He'd been warned that this would have to happen a few days earlier, but it was the first I was hearing of it. Listening to my father's pained voice over the phone, I knew exactly what I felt. Anger.

He sent me pictures and video of the move. I saw the skeletal remains of my grandfather, the writer Ihsan Abdel Kouddous. His skull, his rib cage, his leg bones. They lay centimeters away from his own father's remains, the actor and artist Mohamed Abdel Kouddous. There was much less left of him. About a meter to the right lay my grandmother, Lawahez al-Mehelmy, the pillar of strength in the family. Her body was still covered in a shroud.

The three bodies are now interred a few meters away, where we hope they will be left undisturbed by the forces that have trampled over this city for so long, crushing it without pause or consideration.

I asked my father what he had felt as he watched the remains of his mother, father, and grandfather being moved. He waved the question away with his hand. I didn't press him.

In the state's eyes, the public is only in the way.

Out on the street, the bulldozer was casually driving up to each cemetery wall and knocking it over. A pair of armored police trucks stood nearby, making their presence known. Families stood in the rubble wearing blank expressions. Not a single graveyard on the street was spared. The area is listed by UNESCO as a World Heritage site. This is what the people managing our city call progress.

And it's just the beginning. Eventually a massive highway will be erected, a hulking gash of concrete cutting through this place of stone, ferrying speeding cars over our collective histories toward new speculative cities in the desert.

I know that we have it better than most. I know that other people and places are getting it worse. I know that Adel*, who works as a driver, was given just 24 hours notice to move the bodies out of his family burial plot to a wholly new cemetery in a different part of the city before they came to demolish it. I know about the flyover being built through a Giza suburb that is so absurdly close to the adjacent apartment buildings that residents can reach out from their balconies and touch it. I know what is happening in Heliopolis, where a series of massive speedways have completely disfigured what was once a picturesque residential neighborhood. I know that these thick new arteries slicing their way through our city are meant to carry its lifeblood away from the bristling, messy center to a nightmarish cookie-cutter future on the outskirts. I know.

But I am still having trouble believing. How can all this be happening around us without our consent? Without even a modicum of regard for the people that live here? How can our city be torn out from underneath us so brazenly? 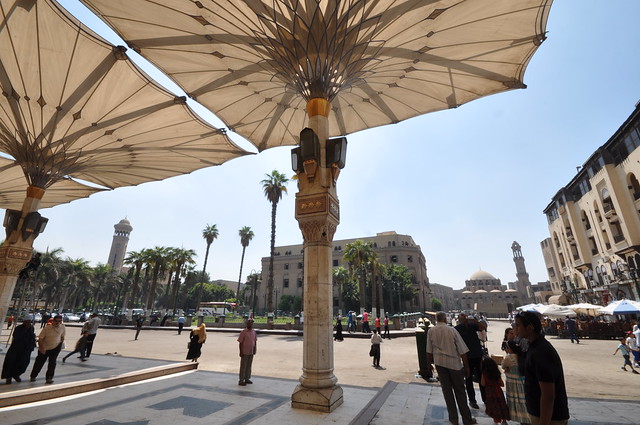 The architectural historian Mohamed Elshahed recently asked on Twitter: "Can a state deploy the concept of the "public good"/Eminent domain to carry out its projects if the "public" has no due process to participate in decision making, at least in municipal affairs?"

In the state's eyes, the public is only in the way. We are nothing more than a nuisance hindering the flow of capital and blind development that needs to be forcibly quashed.

They don't even play by their own rules. In 2018, the Ministry of Housing and Urban Development published a decree in the Official Gazette that contains an inventory of cemeteries it recommends should be preserved because they "represent a historical era" and a "distinct architectural style." Listed there, in the "Al-Ghafeer cemetery area" along with dozens of others, is my family's burial plot. Registration number 216. "The families of Radwan and Abdel Kouddous. The writer Ihsan Abdel Kouddous."

The writer Ihsan Abdel Kouddous. I remember when he died. It was January 11, 1990. I was 11 years old. It was my first real experience with death. I remember waking up late and walking into my mother's room to ask why she hadn't woken me up for school. I remember that I immediately burst into tears when she told me my grandfather had died. I remember being overwhelmed by that feeling of Never. Never would I see him again. Never would I talk to him again. Every time I tried to absorb the fact that he was gone, the suffocating idea of Never drowned me in waves.

I remember parts of the burial. It was packed with people. I remember someone screaming when his shrouded body was carried out of the coffin and down into the tomb below to be placed next to his father. I remember that everyone was wearing sunglasses, and that I wanted a pair so I could look grown-up.

Our bodies are never safe from the people who rule this place.

My grandmother died four years later, on January 7, 1994. This time I was 15, and I helped carry the coffin. This time, I followed my father down the steps into the tomb. My grandmother had insisted that she be buried alongside my grandfather in the same room. We laid her down next to him and lined a row of small stones in between them. That was the last time I entered that room, until last Saturday, when I saw it again 26 years later. This time it was empty.

Our bodies are never safe from the people who rule this place. Not in life, not even in death. What about our memories? Will they too be slowly erased along with the city?

On June 22, the adviser to the president for urban planning issued an order to build what it called "the Fardous axis." Stage One passes right through Ibn Qonsowa Street, where our plot is. So it has begun. The order mandates the Housing Ministry and the Governorate of Cairo to make substitute arrangements for any residences, commercial outlets, or graveyards that block its path. I guess we should count ourselves as lucky that we didn't lose it all.

A few years ago, my father took me to the graveyard to show me where he had added a series of underground rooms. "They're for us," he said with a mischievous smile. I laughed. Those are gone now. Ever the engineer, my father is now figuring out where to rebuild those extra rooms. I am afraid to tell him my worst fears. That eventually I may have to leave, by choice or by force. Will I be buried here?

I lived abroad for many years but I have lived in this city longer than any other. It is maddening to watch a place you love be demolished, erased, scarred over and over again, instead of being tended to and improved. It is happening now faster than ever.

They even named the flyover Fardous. It means paradise.