Five Germans, from the former East Germany, who were born on or near reunification 25 years ago, talk about how the past is bound to shape the future.

BERLIN — They are as old as German reunification. They grew up in a time of transition, with a freedom that generations before theirs could only dream of. At the same time, they experienced the uncertainty of their parents, whose worlds changed completely from one day to the next. They had to find their way amid the confusion in Berlin, in the provinces, and abroad.

How were young East Germans born during the transition years affected? What hopes and expectations do they have? To what extent do they represent Generation Y, and to which generation do they really belong?

We spoke with five young people who didn't actively experience much of East Germany but who nevertheless live with the awareness of what it means to be East German.

Laura Harmsen, social worker in Berlin born in 1989 in East Berlin
I was born in East Berlin on the day the wall came down, on Nov. 9, 1989. My parents' lives changed twofold on that day: They had their first child, and the system they were raised in stopped existing. My birthday is sometimes a bit of a pain. I'm often interviewed and asked to take a position on one thing or another. But there are nice reactions, like when I'm in some administrative situation and have to provide my birth date. People react immediately when they hear the date and tell me what they were doing on that day.

As a kid, along with other children born when the wall fell, we were asked to celebrations every year. The mayor of Berlin asked us to the town hall five times, but that was pretty boring because we had to sit still, and there were long speeches. Volkswagen organized stuff for us — we went to the circus, and to see David Copperfield. I got my first Barbie on one of those occasions, which my parents weren't crazy about.

My father, who is a journalist with the Berliner Zeitung, once showed me a diary he kept after I was born. One passage addressed to me reads, "Grow up to be a free, responsible person, and don't let yourself be deformed by us for we are marked by a lot of things we now want to rid ourselves of." I find that very moving, particularly the thought about freedom. I'm happy about the possibilities I have, like learning languages and traveling.

Where I grew up there was a spirit of optimism. My parents used their freedom. My mother, who had always wanted to go to Paris because she'd read The Three Musketeers, saved all the welcome money we got from the government and was able to travel to France in 1990. And I've always wanted to make the most of the freedom I have. I taught kids in Ecuador. Now I'm a social worker and work with the homeless. Yet I have a feeling of expectations, of pressure, because I have every possibility. Which decision is the right one? I find figuring that out difficult.

Juliane Leopold, editor of BuzzFeed Germany in Berlin, born in 1983 in Halle an der Saale
For people our age, the difficult thing about an East German identity is that we live in a permanent split. On the one hand, people don't want you to talk about the differences, such as all the possibilities the West Germans had and we didn't. On the other hand, we want to hold on to our identity even if it's just for our parents' sake. I see it with language: As soon as I'm back with my family in Halle, I start using the local dialect again. Talking the way I do in my professional environment in Hamburg or Berlin is the cause for occasional parental eyebrow raising, although they know it doesn't make me any less myself.

I would welcome being able to talk about the differences without being accused of whining. We'll soon be at the point where we've been without a wall for as long as we had one, although we'll continue to be marked by the wall. For example, as regards religion, how we celebrate Christmas. I don't feel like giving up atheism just because I live in reunified Germany. An East German friend of mine once told me she feels swallowed up, but I don't give the issue much space in daily life because I have to function. That sort of thing isn't talked about a lot, which is typically East German: You have to clench your teeth, can't do the psychological stuff.

As editor-in-chief, I'm currently building up the German offshoot of BuzzFeed. Before that, I worked for other profit-oriented businesses, and I don't think commercial success is something reprehensible if you are genuinely enthusiastic about the idea underlying the business.

I see this pragmatism as positive even if — since it has become a synonym for Angela Merkel's governance style — pragmatism has been disparaged. I would go so far as to say that in 2014 this is a universal East German experience — putting pragmatism before ideals. Ideals have already shown themselves to be hollow.

It's also the Selfie generation in Berlin. Photo: Mika Stetsovski

Carolin Kneisel, a Berlin student born in 1987 in Gera
When my parents and siblings talked about East Germany, I couldn't be a part of the conversation as the youngest child. But what I took away from those talks was an attitude. I volunteer for Red Cross disaster management projects and have also worked with Tafel, an aid organization that distributes food to the needy. Even if we now live in a capitalist system, it's important that we have a sense of ourselves as a community. I approve of the ideal of a society of people raised together and who vouch for one another, although in East Germany they forced you to be public-spirited, which I don't think is good. I studied in Bavaria and Hesse and found out that, although I didn't directly experience life in East Germany, I was influenced by it in some ways. For example, I couldn't even imagine just being a stay-at-home mom looking after the kids.

My mother always worked, and we were in day care or kindergarten. In Hesse, where I studied peace and conflict research, many people claim that that's not okay, that children need their mother. I even hear it from women my own age. I don't get it. How do they think we were raised? Left alone and neglected?

I would like my future job to be one that enables me to bring people together. Preferably it would be in Leipzig or Jena, which are now also attracting people from the west. In the past few years, a lot of cities in the east have really upgraded and they are creative but still inexpensive.

Trung Hoàng Lê, Hamburg psychologist born in 1980 in Hanoi, raised in East Berlin
As a Vietnamese child who came to East Germany from Hanoi shortly before the transition, my experiences were the same as East German children. Except that when the wall fell my parents faced the possibility of being sent back to Vietnam. My father is a civil engineer, my mother a textile engineer, and they'd moved to the outskirts of East Berlin. We lived near a university where there were a lot of students and other foreigners. After the transition, we had to fight to be able to stay in Germany. My parents took jobs working in kitchens to see me and my brother through. At 14, I had parents whose only concern was survival, forging a place for themselves in society.

The first time I experienced racial hatred was in reunified Germany, when I was in high school. I had to bring a classmate of mine some stuff for a project. When I got to the garden gate and rang, his mom came out and yelled that I couldn't come in. Time and again in Berlin I was attacked by radical right-wingers. One spit against the tram window where I was seated. Or I'd be walking down the street and one of those black Golfs so many of them drive would stop next to me, the window would go down, and there would be four guys with shaved heads just staring at me. 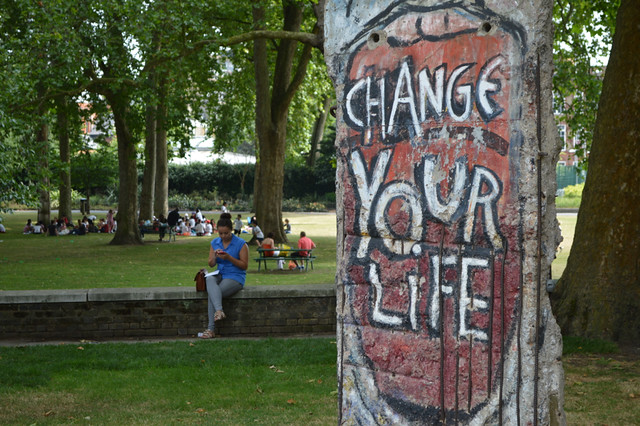 Fragment of the Wall at the Imperial War Museum. Photo: Matt from London

In my work, I've had the chance to take a closer look at right-wing extremism. I worked in a psychiatric ward and had young patients who had committed crimes. They were often part of right-wing gangs. I saw that the attraction of the gangs for them was the simplicity and the sense of belonging to something. Wearing a uniform gave them a feeling of security. They would often use the word "comradeship." They were getting something out of these gangs they weren't getting from their collapsed families.

Friedrich Göring, a student in Erfurt born in 1989 in Weimar
After the peaceful revolution, my mother went into politics, first with Alliance 90 then the Greens, the party I'm a member of today. When I was nine, she was a member of the federal parliament. Sometimes it wasn't easy for us kids. Politics is not the kind of job that you can just set aside, not take your calls or reschedule your meetings. So with her work claiming so much of her, it was important for us to understand why, what it was that mom did.

My father is a pastor, and he often said that back in the day in East Germany he was the only one in the village who criticized things openly. Outside our family, politics weren't much discussed when I was growing up. The parents of my schoolmates didn't talk much about politics, and the kids not at all. For years I was practically the only one in my circle of friends who knew how our parliamentary system worked. This disinterest on the part of my generation means that the opportunity for debate about the illegitimate state of East Germany is passing us by.

I believe that the biggest difference between our generation and our parents' is that lives today seem less pre-scripted. I study culture and media management, and I don't know which field I'll end up in. To feel pretty lost in your mid-20s, not to know where you're going — I don't think you had that before. In East Germany your line of work was practically decided for you.

On reunification day, we were with our grandparents in a little place in the former no-go zone, where the fence used to be. Even a 5-year-old can understand why it's stupid not to be able to go from one farm to another because in between there's this dangerous fence. I want my children — my girlfriend gave birth to twins earlier this year — to be people who think politically.

With the advancement of AI technology, certain aspects of our individual being may survive beyond the grave. Will we live forever, in other words, just as some artists already do?