In the Kuikuro village, at least half of the 400 residents were infected - Valter Campanato/ABr

The Kuikuro tribe lives in the southern Amazon region, near the headwaters of the river Xingu, an area where the tropical forest spreads across centuries of pre-Colombian civilizations. These villages were once completely shut off from the rest of the world, made impenetrable by the dense vegetation surrounding them. But here too, like in the rest of the Amazon, the coronavirus arrived.

Some 30,000 indigenous people of 156 different tribes have become infected with the coronavirus in Brazil in the last few months, according to the Articulação dos Povos Indígenas do Brasil (APIB). Across the Amazon, an estimated 800 indigenous people have died of COVID-19.

Still, there appears to be one notable exception. In the Kuikuro village too, at least half of the 400 residents were infected, according to the Kuikuro Association of the Upper Xingu. The virus infected young people, adults, the chief Afukaká Kuikuro and even a 90-year old woman. But the notable fact here is that they all survived.

Ever since the coronavirus first hit Brazil in mid-March, there were warnings that a disaster loomed for the indigenous peoples of the Amazon — who in the past have already been exposed to wave after wave of fatal epidemics that often decimated them. The National Articulation of Indigenous Peoples of Brazil (APIB) has denounced the lack of an emergency plan to combat COVID-19 in indigenous lands after Jair Bolsonaro's government failed to introduce measures to contain the spread of the disease in indigenous lands until the beginning of July when it was ordered to do so by the Supreme Court.

Both smoke and the virus weaken the respiratory system.

Dinamã Tuxá, the executive coordinator of APIB, believes that the government's denial of the disease exposed a deeper weakening of indigenous health policy in the country. "With the arrival of the coronavirus, we realized that the state was unstructured in terms of indigenous policy, especially in terms of indigenous health," says Tuxá. "Dealing with the coronavirus would be difficult because other theoretically isolated territories were seeing high infection rates. We also thought it would take longer for the virus to arrive."

So in March, even if there were no cases of the disease in the Xingu region, the Kuikuro realized the danger was imminent and raised funds to build an impromptu hospital in their village. The association has also hired a medical team to work with about 120 indigenous health agents across the region.

The hospital has been generally effective, says family health expert Dr. Giulia Parise Balbão: "Elderly women almost 100 years old became seriously ill, they needed oxygen, but they were treated there, we didn't have to bring anyone somewhere else. The indigenous people have a strong connection to the land, which is very strong, very important and very intense." 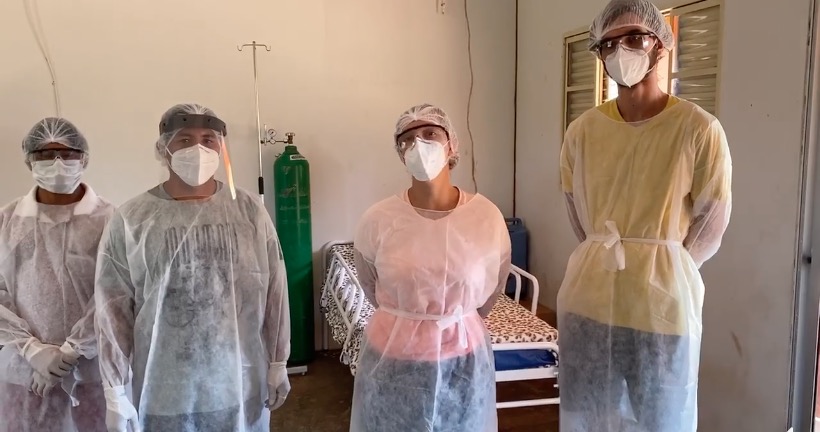 Yanama Kuikuro, President of the Kuikuro Indigenous Association of the Upper Xingu, says the initiative was taken to avoid delays that could cause deaths. The association warns that the recent increase in wild fires in the region is another factor that has worsened the indigenous villages' ability to combat the pandemic.

"The woods are burning, there's a lot of smoke," Yanama says. "The amount of smoke made the situation of patients worse because both smoke and the virus weaken the respiratory system. When the wind arrived, the smoke got even worse."

The Kuikuro's organization has been an exception in the Upper Xingu region, which has a population of approximately 7,000 indigenous people, according to the association.

"In other villages, in other peoples, there was a lot of mortality — for example, among the Kamaiurá and the Yawalapiti," says Yanama. "We had already talked to people in each village, we got organized. Among the Kuikuro, there were no deaths."

Rafaela Dutra was working in Rio de Janeiro's tourism industry and studying to become a nurse ...

Brazil: What's Fueling The Fires In The Pantanal

SÃO PAULO — One of the world's most important biodiversity regions is experiencing the worst ...