Coronavirus — Global Brief: Why Are So Many Doctors Dying?

For the coming weeks, Worldcrunch will be delivering daily updates on the coronavirus global pandemic. The insidious path of COVID-19 across the planet is a blunt reminder of how small the world has become. Our network of multilingual journalists are busy finding out what's being reported locally — everywhere — to provide as clear a picture as possible of what it means for all of us at home, around the world. To receive the daily brief in your inbox, sign up here.

SPOTLIGHT: WHERE ARE THE MASKS? THE ALARMING RISE OF DOCTORS DYING

Italy's overall COVID-19 death count, currently above 7,000, is stunning enough. But another number is no less disturbing: 30 doctors who have died, after they contracted the virus working to save the lives of others. Yes, the doctors, nurses and other medical staff are the heroes — and martyrs — of this global crisis, much like New York firefighters who rushed up the Twin Towers just before they came crumbling down.

But this disaster is different, as it unfolds day after day, and often in contrasting conditions for the medical crews. The World Health Organisation has reported a global shortage of the medical masks, gowns, gloves and eye protection that are recommended for treating COVID-19 patients, and also reduce the chance of infection for the caregiver. In Italy, some 5,000 health workers have been infected, and are dying at a rate of two per day since the first doctor died on March 11. Criticism has been growing over the shortage of protective equipment, with doctors often wearing the same face mask for over a week. La Repubblica reports that in the city of Palermo, doctors and nurses have even launched a fundraising drive to purchase masks. In India, a leading doctors' association has written a letter to authorities pleading for more surgical masks and gloves.

Still, to have any chance of limiting the overall death rate, countries need even more doctors on the front lines. In the U.S., where the crisis appears to be reaching a peak, New York Governor Andrew Cuomo has called for retirees to help staff the hospitals as the amount of emergency beds needed is predicted to double. Despite the obvious infection risk for older people, the call was answered by 30,000 former health professionals as of Monday. The first doctor to die from coronavirus in France was a recent retiree, 67 year-old Jean-Jacques Razafindranazy. A colleague in the northern French town of Compiègne told Le Parisien daily: "We didn't ask to die. We assume our responsibilities, but people don't realize the gravity of the situation."

MORBID POWER OF A NUMBER: To signal the gravity of the crisis, Spanish healthcare officials earlier this week announced that COVID-19 was killing one person every 16 minutes in the capital of Madrid. Now Iran, which has thus far tried to downplay its toll, has used a similar public calculation: Tehran-based website Entekhab reports that the Iranian Health Ministry estimated an Iranian is dying of the virus every 12 minutes. "We said this before, those countries in denial and which are not transparent will soon face an eruption of this illness," ministry spokesman Kianush Jahanpur said. It was a message Iran has learned the hard way.

COVID BASIC INCOME: Will the coronavirus usher in a whole new economic era? The Universal Basic Income (UBI), which gives all citizens a minimal monthly stipend, has been touted in recent years by progressive policymakers as a much-needed way to redistribute wealth. Now, with the crippling effects of the coronavirus crisis on the economy, it may be the UBI's moment to show its worth:

Several provinces in South Korea have pledged to provide their residents an "anti-disaster basic income" to help cope with the economic impact of the COVID-19 outbreak. The Korea Times reports that the province of Gyeonggi is leading the way after announcing this Tuesday it will pay 100,000 won ($79.85) per person to all its residents in April.

• In the U.S., several states had already tested a UBI prior COVID-19. The $2-trillion stimulus package introduced Tuesday night to Congress, includes $1,200 in direct payment to workers with incomes up to $75,000 per year, gradually decreasing to end for those earning more than $99,000. An additional $500 per child will be granted to families.

• In the UK, there have been calls from a wide range of political parties to approve a basic income as a response to the breakout. As The Guardian reports, former Conservative business secretary Greg Clark urged the government to act immediately to subsidize wages, while Citizens Advice proposed a "crisis minimum income" of at least £180 a week (around $210) so everyone has enough money "to protect their own health and the health of others." 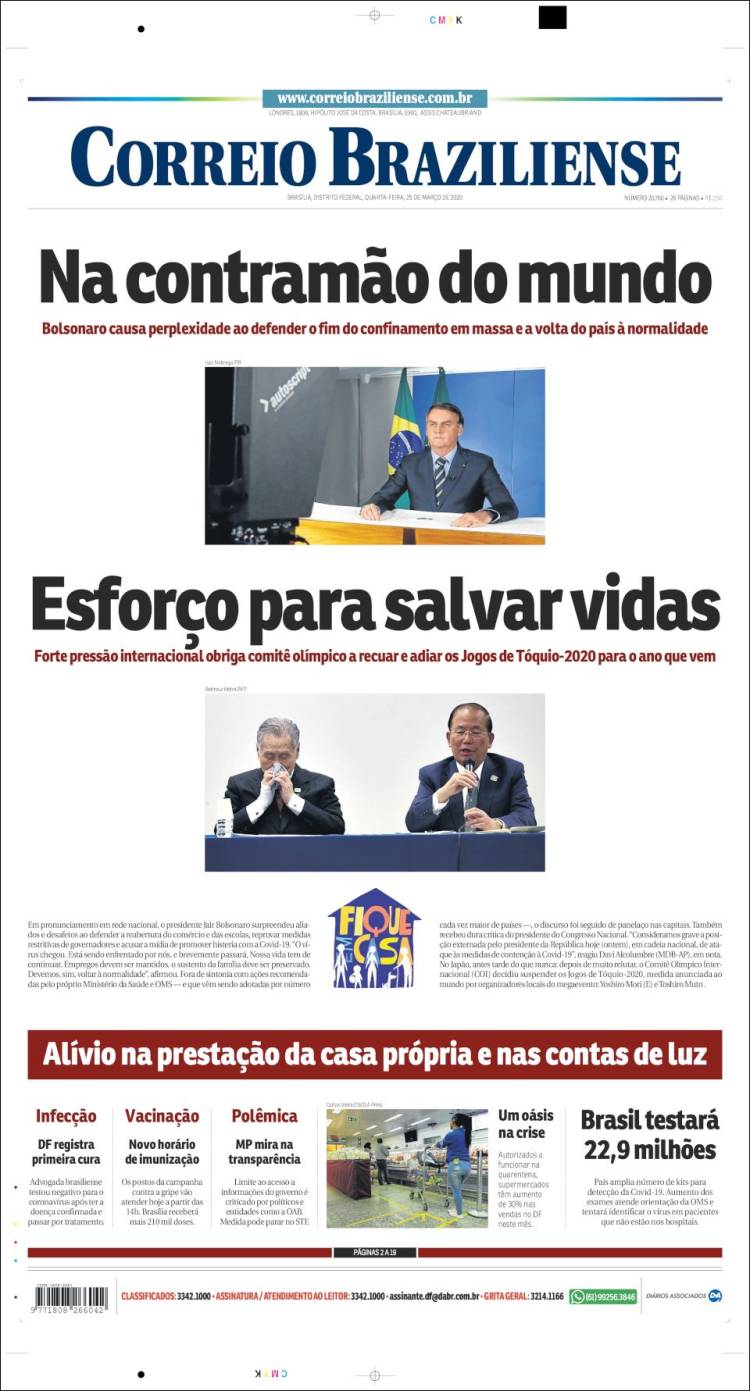 BOLSONARO vs. WORLD: "Against the world's efforts to save lives" reads O Correio Brazilense's March 25 front page, following President Jair Bolsonaro's stunning press conference, during which he insisted that coronavirus concern was overblown while urging Brazilians to go back to work.

SWEDES REFUSE TO CANCEL SKI HOLIDAYS Hailed by other European countries for managing social distancing without imposing heavy lockdown restrictions, Sweden's laissez-faire model is showing its limitations: Stockholm-based daily Expressen reports residents from the country's largest cities are still pouring into the most popular ski villages, åre and Sälen, which are located in areas with low access to emergency care and disproportionately elderly populations. As hundreds of skiers are gathering in after-ski bars, residents have started to put up signs urging tourists to show some respect and go home.

QUARANTINE CONTROLS I: The enforcement of countrywide restrictions in France just got a tad more dystopian, with the use of drones and helicopters to monitor citizen's movements, Marseille-based daily La Provence reports. With more than 100,000 police deployed to monitor strict restrictions on movement, drones have already been deployed in the southern cities of Nice and Marseille to film public spaces and announce the details of the new measures over their loudspeakers.

QUARANTINE CONTROLS II: The Ministry of Digital Affairs in Poland has developed a mobile app to track people returning from abroad put under mandatory two-week-long isolation. The Warsaw-based daily Gazeta Wyborcza reports that quarantined individuals, currently about 150,000 people according to the news site, now have a choice: Either they get unexpected visits from the police, or download the app Kwarantanna domowa (Home Quarantine), which randomly requests their selfies throughout the day, verifies users' geolocation and notifies the police if no selfie is uploaded within 20 minutes.

QUARANTINE CONTROLS III: In Buenos Aires, the local government has converted three sports arenas into shelters for the estimated 7,000 homeless people in the Argentine capital during the coronavirus crisis, to ensure hygiene and limit spread among this vulnerable segment of society. But the Clarin daily reports that NGOs and church groups, who estimate that some 7,000 people live on the street, note one crucial difficulty: Many of those who usually care for the homeless are elderly volunteers, another at risk population now forced to stay at home.

To receive Worldcrunch's daily coronavirus brief in your inbox, sign up here.

Italy was hit particularly hard and early by the first wave when northern region of Lombardy beca...

Simply condemning the recent racist violence in Italy falls short in confronting a colonial past ...