Coronavirus — Global Brief: The Benefits Of Sharing The Bad News

The insidious path of COVID-19 across the planet is a blunt reminder of how small the world has become. For the coming weeks, Worldcrunch will be delivering daily updates on this crisis from the best, most trusted international news sources — regardless of language or geography. To receive the daily Coronavirus global brief in your inbox, sign up here.

SPOTLIGHT: THE BENEFITS OF SHARING THE BAD NEWS

If the fabric of our globalized society has been tested by the spread of COVID-19, that's also true for our national leaders. Our prime ministers and presidents are facing the kind of leadership challenge they could never have prepared for, with one thorny social-economic-cultural-constitutional dilemma after the other. High on that list is the question: How do you deliver unimaginably terrible news to your citizens?

It would seem so far, as the severity of the crisis becomes more apparent, that people prefer straightforward communication from their leaders. Germany's Angela Merkel warned at an early stage that up to 70% Germans could eventually get the virus and was the first leader to liken the crisis to war. The Chancellor's approval rates have steadily increased, with a recent poll showing that 89% of the German people believe the government is handling the situation well. This is also true for France's Emanuel Macron whose approval rating has jumped to a nearly two-year high of 43% after the country was put on lockdown March 17 with an even more aggressive declaration of "war" against the virus. Italy's Giuseppe Conte — seen by many as a short-term, accidental leader — has risen in stature by a similar approach of coming clean about the death that coronavirus was bound to bring.

Across the Atlantic, Donald Trump has reliably played his entirely own game. For a while that meant mostly downplaying the crisis while assuming the role as arch-expert and protector of the American economy. But despite harsh international critique, a recent Gallup Poll shows that for only the second time in Trump's presidency, more Americans approve (49%) than disapprove (45%) of his performance, while some 60% gave him positive reviews for his handling of the crisis. Some experts attribute this to the "rally-round-the-flag" effect of the crisis, as it increases patriotic sentiments while some punches from the opposition are pulled for purposes of national unity. However, it seems Trump realizes there is truly bad news to come. His press briefing on Tuesday, which included warnings from health officials that the death toll could rise to 240,000, took a completely different tone. It's safe to say that Trump is thinking about his polls number, but there's also that always pesky factor called reality.

WUHAN ASHES "MIXED TOGETHER": It's been one week since residents in Wuhan, the Chinese city where Covid-19 originated, have been allowed to collect the ashes of their family members who died during the epidemic.

The long lines outside each of Wuhan's eight crematoria suggest the official coronavirus death count of 2,531 may be just a fraction of the true toll. But reports say despair is spreading among the relatives of the victims for another reason: the ashes may not be identifiable.

Tang Dynasty Television reported that social media posts by a local resident named Qin Peng, who said one of the crematorium confirmed to him that the ashes of all the dead were "mixed together, and just divided into equal amounts in the funeral urns in accordance with the total death toll."

"This is definitely 100% possible," another anonymous Wuhan citizen told the network. "During the peak time of the pandemic, the crematoria were burning several corpses at one time in each incinerator. No family member was allowed to be present. Who knows what they were doing."

"If the doctor upsets so many, it's probably because he is right ..."

— People are asking why French physician Didier Raoult's hydroxychloroquine and chloroquine treatments for coronavirus aren't more widely applied — and some are taking their suspicions to a dark place. Read Le Monde's Damien Leloup and Lucie Soullier article A French Doctor, Hydroxychloroquine And Conspiracy Theories, translated from French by Worldcrunch. 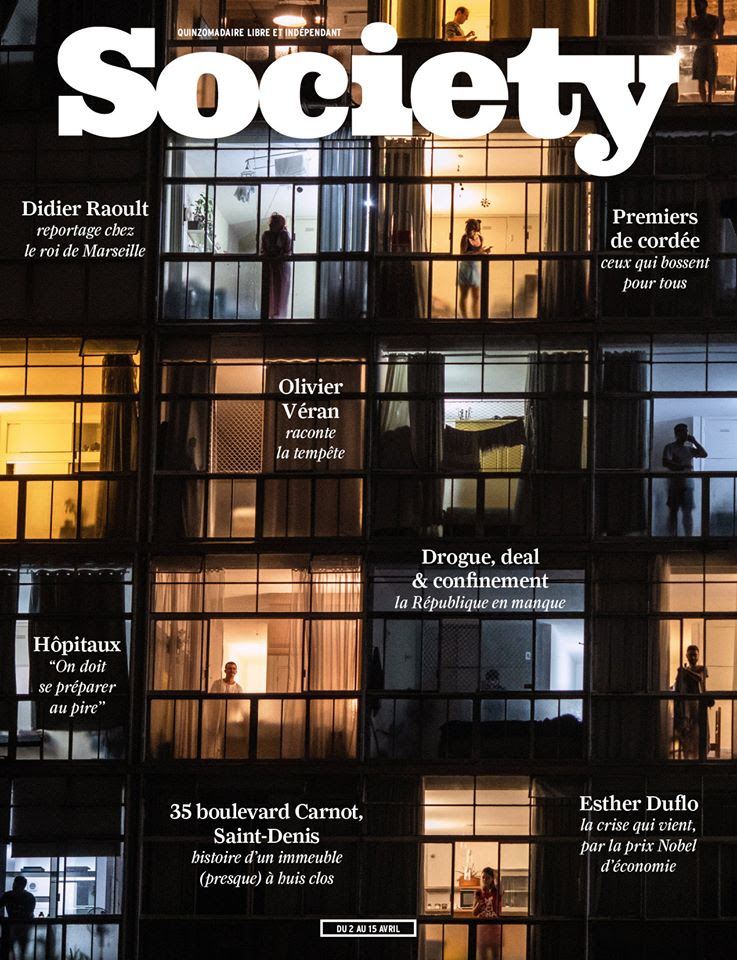 This week's cover of French magazine Society,
with the country more than two weeks into lockdown.

TOURISM LOCKDOWN: One after the other, countries have been closing their borders, prohibiting gatherings inside their territory and closing popular vacation sites. It is a virtually worldwide, though hopefully temporary death to tourism. This year was supposed to set a new record with an ever rising number of tourists around the world. According to the World Tourism Organization, it will, indeed, set a record, but the opposite one, as it is expected to be the worst year since World War II. Tourism supports one in 10 of the jobs in the world today, meaning up to 75 million jobs could be at risk by the COVID-19 crisis, reported the World Travel & Tourism Council (WTTC) in their latest research.

LOVE KNOWS NO BORDERS: Inga Rasmussen and Karsten Tüchsen Hansen, ages 85 and 89, have spent everyday together since they met two years ago, already a beautiful later-in-life love story. Now, it has a COVID-19 plot twist. The couple live on opposite sides of the Danish-German border, according to Deutsche Welle. Despite this, they meet up every day on either side of the closed border: sharing conversations, lunch or some biscuits and a flask of coffee or Geele Köm — a popular spirit of the region. Cheers to both! Wishing them good health and the chance to get a bit closer very soon!

• Teleworking comes with its challenges — one of them is trying not to set off the "potato" filter during video conferences.

• Sorry, pranksters of the world: it's probably a good idea to cancel this year's April's fools … but how about we revisit some previous ones from around the world?

Advertising has us convinced that cheap meat is something we can't live without. But the meat ind...