Coronavirus — Global Brief: Information, The Poison And The Cure

The insidious path of COVID-19 across the planet is a blunt reminder of how small the world has become. For the coming weeks, Worldcrunch will be delivering daily updates on this crisis from the best, most trusted international news sources — regardless of language or geography. To receive the daily Coronavirus global brief in your inbox, sign up here.

SPOTLIGHT: THE POISON AND THE CURE OF CORONAVIRUS INFORMATION

When considering the risks of misinformation circulating about COVID-19, the virus analogy is too useful to pass up. Self-serving broadcast propaganda, "fake news" targeted for social media clicks, bad medical advice passed on to a friend ... or a nation: all of it can spread rapidly — with the symptoms in plain view, or all but impossible to detect.

Of course the actual cure to the coronavirus ultimately rests in the hands of doctors and researchers. Yet until then (and beyond), the importance of a free press, of reliable and accurate information — especially in our digital age — cannot be overstated. Indeed, the plot line of what is perhaps the most far-reaching news story since World War II begins with Li Wenliang, a 34-year-old doctor in the central city of Wuhan, who was silenced by Chinese government officials for sounding the alarm online about coronavirus back in December.

Since then, we have seen political leaders from Brazil and the U.S., to Hungary, India and elsewhere, either spread misinformation or impose restrictions on the press, or both. This week in India, professional journalist associations tried pushing back against the goverment's new controls on how to report on the pandemic.

We sit on a particular perch at Worldcrunch as a global source of information that discovers, interprets and connects other sources from different countries and languages. More than ever, we are only as good — and free — as our colleagues around the world.

THE SWEDISH EXCEPTION: As COVID-19 shuts down vast swathes of the world, Sweden has become Europe's last "open" holdout. In the 10-million strong Nordic country, borders, elementary schools, offices, gyms and even restaurants remain open. So far, some 5,500 have tested positive for the virus and more than 300 people have died, but the government stands firm: No lockdown is the order of the day. What's the rationale: 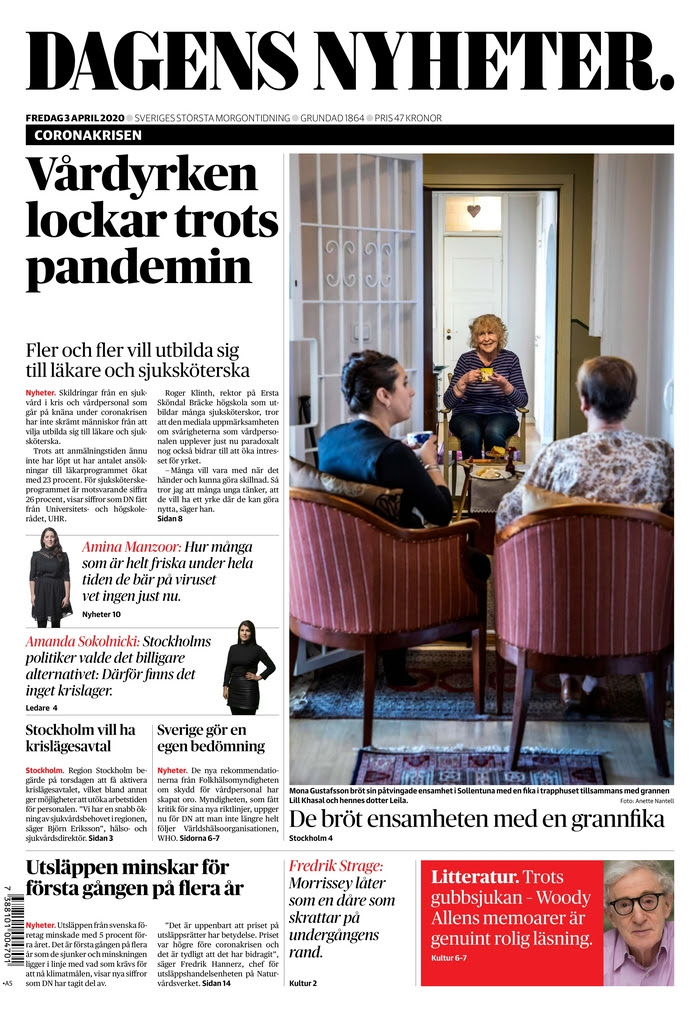 VIRTUAL HOMMAGE: The Qingming Festival, also known as Tomb-Sweeping Day, is an important annual rite for Chinese families to pay respect to departed loved ones — the cultural equivalent of the Christian holiday, All Souls Day. But as the country is slowly recovering from the COVID-19 pandemic, authorities are worried that the often crowded public occasion could spark new outbreaks. Special arrangements have been made this year to allow survivors to honor their ancestors virtually, either by watching a broadcast of the traditional ceremony performed by members of the cemetary's staff, or through a personalized, live-streamed ceremony for which they can hire "professional tomb sweepers."

THE GLOBAL HUNT FOR A VACCINE: As the coronavirus continues its morbid world tour, spreading via human contact at remarkable speeds, medical researchers are in a race against time to develop a vaccine. The general consensus is that it will take 12 to 18 months to map out and produce an effective solution to immunize the global population.

• What day is it, even? Here is a Coronavirus calendar to help you keep track of your quarantined life.

• "Use age-appropriate language, watch their reactions, and be sensitive to their level of anxiety": UNICEF's advice on how to talk to your kids about the pandemic.

• Dressing up down under? Australians start putting on their "bin day best" to take the trash out.