A Dubious Chinese Link To The Grand Nicaragua Canal

Groundbreaking on the much heralded Central American project is said to be imminent. But huge doubts linger, including the bankrolling of the project by a mysterious Chinese businessman.

MANAGUA — If it actually gets built, the Interoceanic Grand Canal — which would stretch for 278 kilometers between Venado on Nicaragua's Atlantic coast to Puerto Brito on the country's Pacific side — would be the most impressive work of infrastructure in the world.

This gigantic ship canal would be larger than Panama's — 30 meters deep, ranging from 230 to 520 meters wide, and splitting Nicaragua in two. It would pass mountains and go through rivers, and use the great Cocibolca Lake, the largest body of fresh water in Central America, to shorten its course.

The government here claims the Nicaragua Canal will be completed by 2020 at an estimated cost of around $50 billion, four times the size of the entire Nicaraguan economy — and some observers say that pricetag is grossly underestimated. It would create at least 50,000 jobs for construction and 200,000 more upon completion.

Construction is said to begin Dec. 25.

"This project will bring well-being, prosperity and happiness to the people of Nicaragua," says President Daniel Ortega, who pushed through parliament a package of legislation for the canal last year. This decision came without public consultation, without environmental or feasibility studies, without parliamentary debate — and without even a fully defined route.

Instead, a company owned by a mysterious Chinese businessman named Wang Jing was given carte blanche to develop the canal at his cost. The Hong Kong Nicaragua Canal Development (HKND), registered in the Cayman Islands, has been given the concession rights for 100 years. The company has the go-ahead to expropriate all necessary land and, in order to profit, implement two ocean ports with oil terminals at each end of the channel, a trade zone free from taxation where a city, international airport and plethora of tourist resorts would conceivably be built.

Both experts and insiders are questioning whether a megaproject like this is really necessary, because the Panama Canal is fully operational and has even recently been expanded and improved.

But according to Keith Svendsen, chief of operations at Danish shipping company Maersk, there is a market for the Nicaragua Canal. "It could accommodate larger container ships than Panama can," he says. "And it would save about 800 kilometers on journeys."

Some estimates say that the new channel would welcome 5% of worldwide commercial maritime traffic, though others, including Hofstra University's Jean-Paul Rodrigue, argue that the canal would never be profitable.

But even before that question, many simply doubt that it will ever actually be built.

Further concerns include ecology and the environment. Scientists Axel Meyer and Jorge Huete-Pérez say the project would pose an "imminent environmental disaster." Around 400,000 hectares (988 acres) of tropical forest and swamps are threatened, and the project would pass near protected areas — not to mention that some river flow would have to be reversed. Above all, it would jeopardize Lake Cocibolca where many rare species live.

The canal would discharge salty ocean water into the lake, Meyer and Huete-Pérez say, and it would have to be dredged and deepened to allow the passage of 5,100 gigantic ships a year. There is a high risk of accidents and pollution too.

Finally, many wonder about the real role of Wang Jing and whether he is actually the long arm of the Chinese government. A 41-year-old lawyer, Wang leads a telecommunications company and has no experience in engineering or infrastructure.

In interviews, he has always denied any government involvement, but for preparatory work his development company is using the Changjiang Institute of China Railroad Construction Corp. — the state-owned engineering giant that worked on the Yangtze River's mega dam.

In Nicaragua, the canal project has raised significant controversy and protests, exacerbated by the highly generous concessions Wang has been offered, which Ortega's opposition claims could hide any traces of enriching the president's family.

"This is a totally shady project," says Carlos Chamorro, son of former President Violeta Chamorro and editor of daily El Confidencial. "We don't know anything about the economic feasibility, environmental dangers or the social ones, as well as those on the country's sovereignty. We call for transparency, for full information on the project and monitoring by independent experts from abroad." 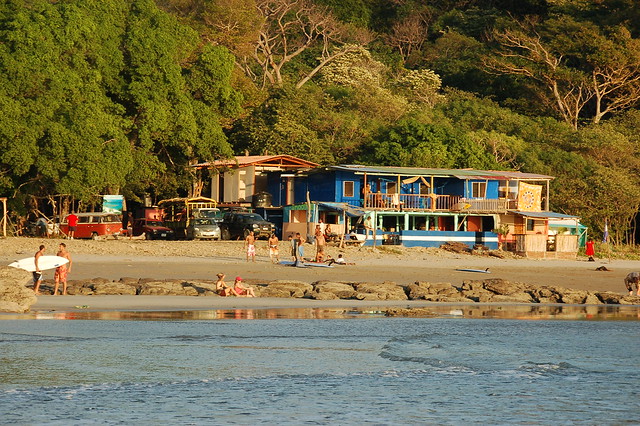 The Brito coast could be the canal's Pacific entry point. Photo: Dilly Lama

Other opponents include three great Nicaraguan writers: Ernesto Cardenal, Sergio Ramirez and Gioconda Belli. All three personalities were at one time close to Ortega's party, but have for some time now been on a collision course with his government.

In recent days, protests have multiplied, especially among those living in the areas affected by the canal's development. The Chinese technicians increasingly are a presence, and are accompanied by government personnel, engaged in geological and engineering studies.

The government, of course, stays busy assuring that everything is in order. "In the next few days, all studies will be released on the social and environmental impacts of the project," says Francisco Telémaco Talavera, outgoing leader of Nicaragua's National Agrarian University and one of the strongest supporters of the canal. "In the end, it will be a positive outcome for the country. We will become a regional economic power and will grow by 14% per year."

None should be more dismayed by Daniel Ortega's despotic slide than those who hailed his revolution as a triumph of democratic socialism, some 40 years ago.

Police and pro-government paramilitaries have killed more than 200 people — including a 14-month-old boy — since a wave of anti-Ortega protests began in mid April.