Through Thick And Skin: In China, Rebellious Couples Say "I Do" To Naked Weddings

Twenty young couples in southeastern Hangzhou recently decided to get hitched without a stitch, wearing only leaves and flowers in rejection of the materialistic concerns frequently associated with marriage in China, Hong-Kong-based Oriental Daily News reports.

This was the second year that the Songcheng Anthomaniac Festival organized such a collective wedding ceremony in Hangzhou. Couples braved chilly temperatures and rain as they marched through a corridor of artificial green leaves to pronounce their vows. 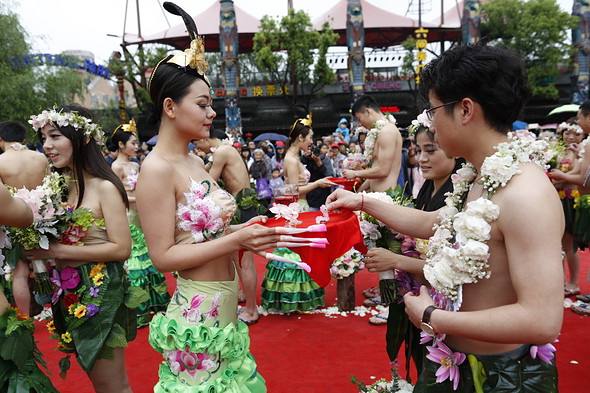 The term luohun, which translates to "naked marriage" in English, popped up in the last decade in the country as a number of young couples spurned the idea that a man is qualified to propose only if he already owns an apartment and a car — a notion promoted by many Chinese parents.

In a "naked wedding," the bride and groom typically don't bother with rings, let alone with the traditionally lavish banquet that usually goes with Chinese weddings.

The pressure on Chinese men to find a bride is intense, and complicated by a lack of potential partners due to the country's former one-child policy and the resulting widespread selective abortion of female fetuses. Unless a man is gao-fu-shuai, — that is, tall, rich and handsome — getting hitched is no piece of wedding cake.

It has the makings of another TV spy drama with a family plot line. But the disturbing revelations of a Le Monde investigation come as a shocking reality for thousands of Uyghur families in China, ...